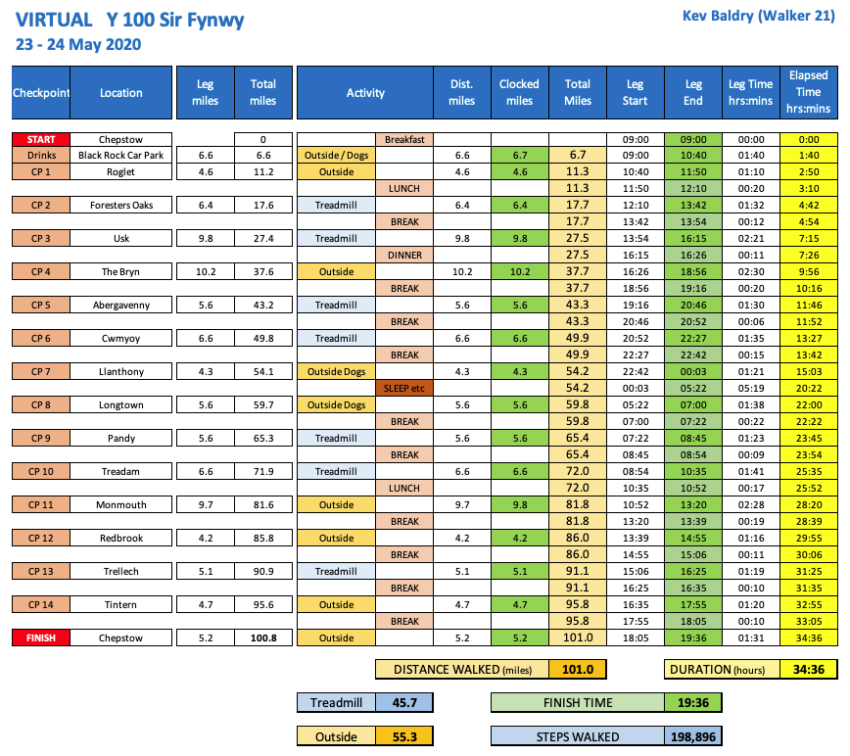 Over the weekend of 23rd and 24th May, using a combination of treadmill and real outdoors walking, I managed to cover a distance of ONE HUNDRED MILES.

Every year, the Long Distance Walkers Association (LDWA) hold a one hundred mile endurance event. Of course, with this year’s restrictions, this event could not be held. However, someone came up with the idea of making it a virtual event instead.

We all know by now that the real Y 100 Sir Fynwy has had to be postponed due to the personal safety measures put in place following the coronavirus outbreak.

So much work has gone into the planning and preparation for this event and knowing people would have been preparing last weekend for the Marshals’ walk, we couldn’t really let May go by without doing something to celebrate this wonderful flagship event. So, for one year only, the 100 walk will be open to all LDWA Members.

The virtual event will build on the work already done in terms of route and checkpoints and will have kit checks, registration, qualifying events (all virtual of course) but the piece de resistance will be a live real-time tracker operating throughout the weekend of the 100 linked to the actual route. Certificates will be awarded to everyone who manages any distance according to the tracker.

MAY WOULDN’T BE MAY WITHOUT THE 100 OF THE LDWA

Now the intention of the Virtual event wasn’t so much to actually walk one hundred miles as to share the atmosphere that surrounds the event.

However, I thought, what if ?

I could break the hundred miles into manageable chunks, the same distances as between the checkpoints. I could have all my provisions to hand. I could have a little sleep in my own bed. I reckoned that I could do it.

It was the beginning of May which would give me about three weeks to get ready. Up intil this point, my weekly mileage had been around 45 – 50 miles a week – I wasn’t training for a particular event so was just ticking over.

I tweaked my master plan adding some longer back to backs at the weekend and some longer mid-week walks. As can been seen, my weekly totals shot up.

Also, when the idea of the virtual hundred was first mooted, we were only allowed out once per day for exercise. With this in mind, I realised that I’d have to do a fair chunk of the walking on my treadmill so moved the device into what was the home cinema. No films for a while but I did have a whacking big telly on which I could watch something to relieve the boredom.

I had discovered a website / app, initially designed for cyclists, which could present you with a virtual landscape through which you would move at a speed relative to your actually walking speed on the treadmill. This service is called Zwift and I have used it quite a lot over the last month.

A couple of weeks before the main event, the coronavirus restrictions were somewhat lifted in England allowing for unlimited periods of exercise. I could do the whole hundred miles outdoors but decided to stick, roughly, to my plan of utilising treadmill and outdoor walking.

I have detailed the actual walking in previous posts so I’m using this post to summarise the event.

This view shows all the different walks which made up the full Hundred. The split between outside and inside was 55.3 to 45.7. Those maths-whizzes may have added 55.3 and 45.7 together and got more than one hundred. The Hundred is always a tad longer just to make sure that the distance anyone walks is at least one hundred miles. In this case, 101.

Apart from one hundred and one miles walked, another statistic is that from start to finish took thirty four hours and thirty six minutes, including all breaks.

The one thing that was lacking from what would have been the real event was the ascents. According to the information sent out before the event, one would need to climb 20,006 stairs over the weekend. If you take the average flight of stairs as being thirteen, I would need to ascend (and descend) our stairs, taking into consideration that we live in a three story house, seven hundred and seventy times. I managed 62. Perhaps, I’ll need to do some hill-work before I tackle the real thing ?

Step-wise, all in all, I walked 198,896 steps. A few less than the ‘official’ estimate but I do takes slightly longish strides. I measured it recently as 0.832 metres. I’m not sure how that all adds up! With such a high ‘steppage’ over the weekend, I suppose that Garmin will up my daily goal to reflect this !

Overall, it was a thoroughly enjoyable weekend. Lots of miles resulting in a feeling of fatigue but overpowered by the sense of achievement.

I took my time especially at the ‘checkpoints’ making sure that I ate and hydrated correctly instead of rushing through as I am apt to do. I took on fluids throughout and had a proper sleep for a few hours.

Up until the actual event, I was partaking in and enjoying the facebook banter but was unable to keep up during the event.

The number-crunching is now happening with the LDWA with certificates due to be posted next week.

I really want to have a go at this for real and reckon that using what I’ve learnt over the weekend could enable me to succeed.

The hundred miles has obviously boosted my #walk1000miles total …