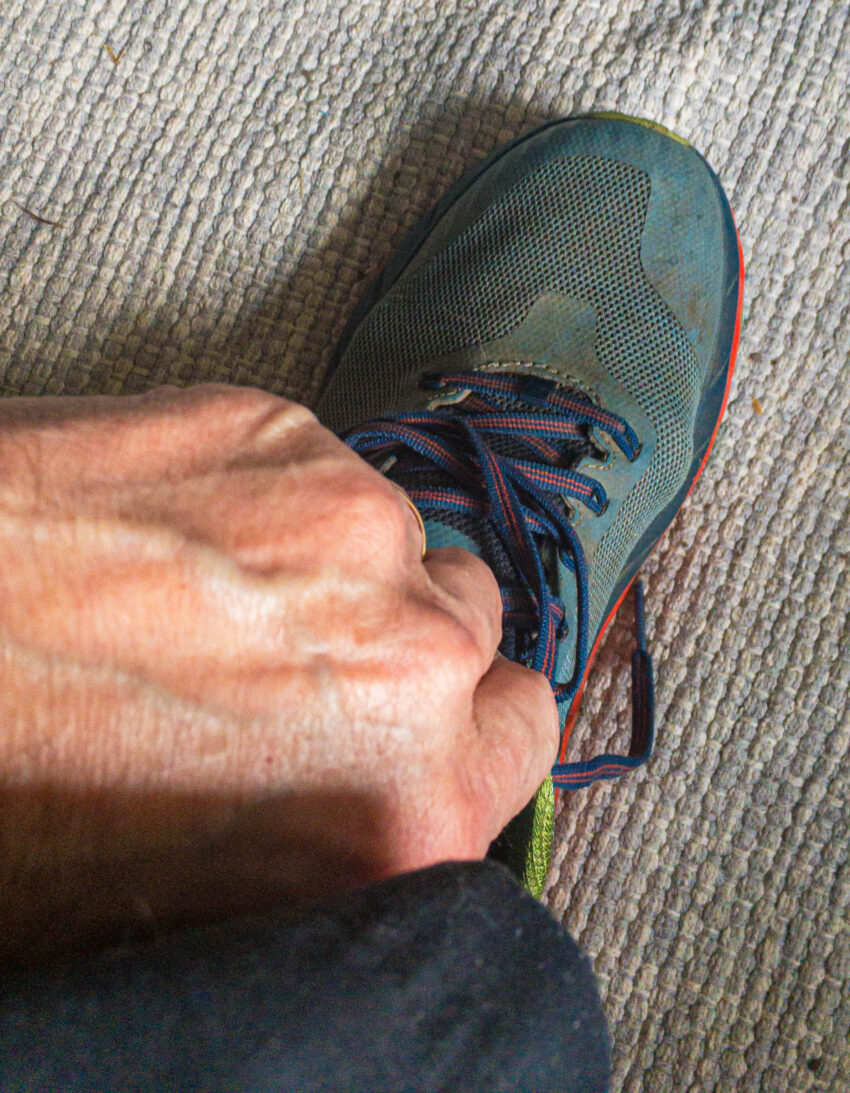 After months weeks of ‘training’, the big day had finally arrived.

The dogs had me up at the usual silly o’clock but they were NOT going walkies before nine o’clock and the start of the virtual Y 100 Sir Fynwy one hundred mile walk.

Initially, when this crazy idea was first mooted, the coronavirus restrictions only allowed for ONE period of exercise per day. To be able to get all those miles in, I decided that I’d have to do a fair bit on the treadmill.

In preparation, I had moved said treadmill into what was the home cinema and set it up in front of my 65″ TV.

I have been using a virtual training aid called Zwift which takes data from my footpod so that it knows how fast I am walking.

Using this info, Zwift presents a virtual world through which to move.

You can’t just go anywhere but have to follow a set route of which there are many. For location I have a choice of London, Innsbruck, Harrogate and Zwift’s own world called Watopia.

So having got myself geared up for a lot of indoor walking, the restrictions were lifted (in England) to allow for as many exercise excursions as you want.

I had gotten somewhat used to treadmill walking so the final plan split the walking between in and out. I had to walk the dogs, anyway, so their walks were included.

Back to Saturday, 23rd May.

It was approaching nine o’clock so I thought that I’d better get ready.

First leg (Chepstow to Black Rock Car Park) was 6.6 miles or roughly twice the Water Orton Loop. Misty would accompany me on the first leg of the first leg before swapping to Gabby.

A little before nine, there was a special facebook video from the LDWA president, wishing us all good luck in which ever way we had decided to do the walk.

Nothing was set in stone. Some would just be doing it for fun, with very little actual walking but taking in the atmosphere.

There were virtual checkpoints set up which. would appear on facebook at the appropriate times where ‘walkers’ could check-in.

There was also the official tracker. Originally devised for another virtual event, The Fellsman, this had been tweaked for our little get together.

Anyway, the video was aired and a special Welsh guest also wished us well (it was in Welsh so in reality she could have been saying anything!)

At nine various messages sprang up saying the tracker was live.

I clicked on the appropriate link, I had confirmation that I had started and we shot out of the front door.

The three mile loop we had done many times before so was a nice little stroll to ease me into it.

The first mile was not speedy but it wasn’t a race and I needed to pace myself.

We finished our lap and then Gabby and I repeated the loop to give a combined distance of 6.7 miles

After leaving the dogs in the capable hands of my other half, I slipped on a walking belt and dropped a water bottle in. I was determined to stay hydrated throughout the event.

I headed for the leafy footpath behind Parkfields following this into the heart of Castle Bromwich. I ascended the private Rectory Lane to St. Mary’s & St. Margaret’s church before nipping through the houses to emerge at the Coach and Horses.

Nothing exciting from here to home but had to add a few extra bits in to get up to the required 4.6 miles.

It was 11:50 when I arrived back at race HQ and time for lunch ahead of my first treadmill session.

After the cheese rolls, it was time for the first treadmill session. I fired up Zwift and chose Innsbruck. I’ve never been to Austria but if the real place is anything like Zwift’s realisation, it looks like a very nice place.

Some of the road signs were a bit odd though. I’ve looked on Google for images of the signs but can’t find any mention. For example there’s one like the UK clearway but with extra ‘spokes’. A bit like the image alongside.

Then there are triangular warning signs of upside down bikes, bikes on tool stands and even a breakdown truck towing a bike !

An hour and a half later, I had done my 6.4 miles but after a twelve minute break I was back pounding the tread with a tour of that here London.

As you can see, I crossed over Tower Bridge 8.61 miles into the 9.8 mile workout.

After London, as I was having some shepherds’ pie that I’d made on Friday, I had a phone call from a good friend who had been reading this very blog. “I didn’t know that there was a Water Orton leg” he exclaimed, “we were out and about just before you started this morning.”

Living in Water Orton, I told Derek, that I would be passing through on my next stint and we arranged to meet up and he would walk with me for a mile (keeping our 2m separation, of course).

I started my watch, told Derek that I was on my way: and I was.

Some ten minutes or so later, I spied the lonely figure who joined me as we headed on past the park and on towards Coleshill. As we walked along, catching up, I commented on various local features of which Derek seemed oblivious. “You ought to get out more,” I suggested. “Oh, this is the ‘other’ end of the village!” he explained.

At the end of Gypsy Lane, on the edge of town, we bid farewell after making sure that my companion knew his way back.

Alone, I crossed under the M42 before crossing the A446 and onto Gorsey Lane to Coleshill Parkway.

If you imagine the route so far as a lollipop stick, I had now come to the lolly.

I decided to go anti-clockwise. Most of the next mile or so was alongside the River Tame as it snaked around the Distribution centre.

Looking at the map, below, makes me realise what an odd shaped lolly it is !

Once away from the roads and tarmac, a green path loops around the park. I was a bit concerned as I was here a week or so ago and got savaged my a myriad of tiny flies. Luckily, perhaps due to the high winds, there were few flying beasties to contend with.

The green way (signed between Lea Marston and Water Orton) was only about a mile long and I was soon back on the pavement heading back to where I had come.

The 10.2 miles took me two and a half hours after which I took a breather to take on food, water and change into my treadmill gear.

Over the weekend, I had two sets of clothes – one for the treadmill which consisted of shorts, vest and Nike Dart shoes with footpod. For outdoors, my other set comprised, technical top(s), fleece top, long trousers, Hoka trail shoes.

Once changed and (slightly) refreshed it was back on the treadmill for another jaunt around London.

I was plodding along, nice and steady, watching the miles slowly ticking by. I must have reached about three and a bit miles when Zwift just decided to stop. Even worse, it crashed and there was I staring at my mac desktop.

Once over the initial shock, I logged onto the Zwift website to see if anything had been recorded. There was a screenshot of my walk at 2.8 miles – so I had to have covered at least that far. Unfortunately, there was no actual walk data, just the screenshot.

I restarted Zwift, and set the target for 2.8 miles which with the early mileage should see me to 5.6 plus some to spare.

The next leg (Abergavenny to Cwmyoy) was 6.6 miles and I should be finishing around half ten in the p.m.

This was unfortunate in a way because the on-line LDWA tracker was due to close at 22:00, reopening at 10:00 on Sunday. I finished my stint at 22:27, tried the tracker, just in case, and was surprised that it let me check in to CP6.

I checked my master plan and noticed that the next section, Cwmyoy to Llanthony was only 4.3 miles and the dogs looked like they could do with a walk.

In the house, on the treadmill, in my shorts and vest I still needed the window open and the fan on to keep me cool. Opening the front door to check on the conditions was a bit of a shock. It were reet chilly!

A fleece and gloves was added to my ensemble.

As usual, Misty first then Gabby. It surprised me how many people were out walking their dogs gone eleven at night. Some were very yappy so maybe they’re too naughty to go out in the day ?

We walked our usual Arran Way Loop and with teh street lights didn’t need any additional lighting.

At least I did a night section !

Oddly, the tracker was still running so I logged into checkpoint 7.

After settling the hounds, I took myself upstairs for a few hours sleep.