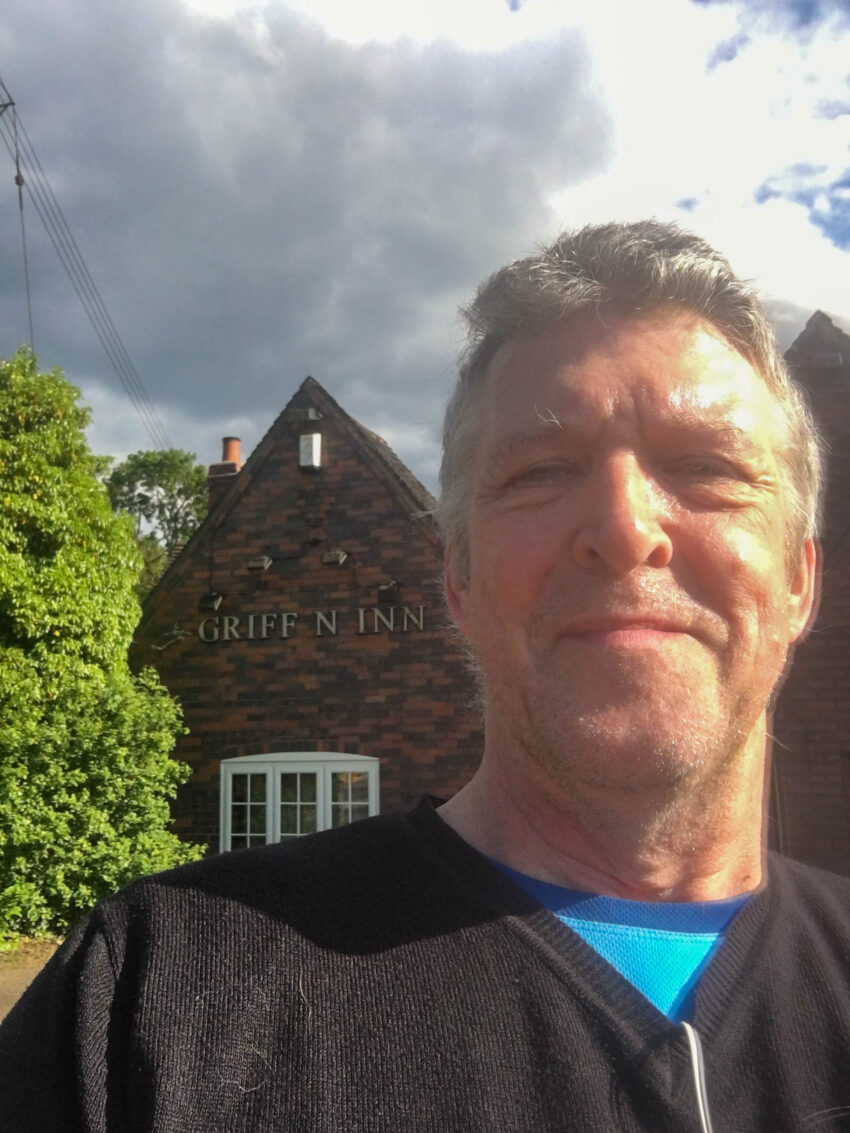 Following on from Boris’s proclamation on Sunday that from today we are not restricted to one period of exercise per day, I though that I’d take full advantage of the easing and exercise, if not the dogs, my right to roam.

In the morning, as usual, it was dog walking with a couple of miles for Misty and the Water Orton, three mile, loop with Gabby.

Total five and a bit miles with the hour for the LDWA Coronavirus 100 challenge giving me 4.1 miles.

After breakfast it was another day in the home office but at four o’clock I was back out of the front door for outdoor exercise number two.

I planned on a walk of around eleven miles, which with this morning would give me sixteen for the day.

I started with a walk over to Coleshill Hall then on the Coleshill itself. A short walk alongside the Cole took me to the old bridge at the bottom of the village from where I took the path up to Blythe Road.

I had planned on walking along the road as far as the reservoir, then cutting through to Whitacre. However, the ground looked quite dry so I decided to chance cutting across the fields from Blyth (no E) Bridge to Castle Lane.

I made my way past Blyth lodge and into the BIG field beyond.

Now, according to the Ordance Survey, there is a path across this field but on the ground there’s nothing obvious.

There is a vague arrow on a post but it doesn’t really match up with where the path should go.

Instead, I continued along the edge until I got to a point that I thought would yield the shortest track across and went for it.

As can be seen from the picture, the right of way is marked as the green dashed line, whereas my progress is indicated by the solid blue line.

Luckily, the field had fairly recently been ploughed and no crops were evident so at least I didn’t trample anything underfoot.

Back on the path proper, it was followed to Castle Lane which was crossed to Hollyland.

I walked past a delightful cottage at the junction of Moat House Lane and on to the end of the lane.

When the road turned left, I carried on, through the kissing gate and on towards the small wood which doesn’t appear to have a name.

Emerging from the trees, a crossed another field to Rose Cottages then on to the bend at The Griffin.

As you probably know, The Griffin is, in normal times, my fave local watering hole. Of course, thanks to the coronavirus restrictions, all pubs are currently closed.

On arrival, I noticed a couple of cars in the car park and a load of barrels taking up most of the other spaces !

Walking past the conservatory, I spied the gaffer and we exchanged a few pleasantries at the requisite two metre distance.

Olly told me that they had made a few improvements during the forced closure and pointed to what used to be a decked area. The entire area had been taken up and replaced with block paving – very smart.

My original plan had been for Sue, the other half, to pick me up from here then go for a walk around Shustoke Reservior with the dogs.

However, she wasn’t feeling great so after an energy gel and the obligatory selfie, I exited through the back of the car park and across another field with an indistinct path across it.

I continued downhill towards the River Bourne.

This little water course is only about eleven miles long from it’s source near Atherstone to the Tame, just past the reservoir. Some water is drawn from this river to top up the reservoir which in turn forms a local water supply.

I walked alongside the Bourne for a short distance before crossing over it and onto a footpath running alongside the Nuneaton railway line.

There are a number of path leading off from my footpath, leading to the reservoir.

All of the paths leading to the reservoir were closed, some by big metal fences.

Continuing along the path, I was somewhat surprised to see other people walking the other way. This path is unusually very quiet and I rarely see anyone along it.

It did feel a little odd to have to step aside to give each other two metres space to pass.

One thing that I did notice, is that some kind soul had taped / tie wrapped all the kissing gate latches open, presumably to stop people touching them.

At the end of the path, I crossed over the railway, past a warning sign for Bees At Work and on to Colin Teall Wood.

From the wood, I turned towards Whitacre and was surprised to see part of an old Post Office stamp vending machine in someone’s front garden.

Back in the day, when people communicated by snail mail, or letters as they were known, stamps were bought a lot more than now. The Post Office was the only place where you could buy stamps and out of hours there were vending machines, usually outside of Post Offices, from which little strips of stamps could be purchased. In 1970, there were some 50,000 of these machine in the UK.

Many years ago, I did my apprenticeship with The Post Office and one of the things that I learnt to do was to service these stamp vending machines. So seeing this brought back some ancient memories.

From Whitacre, I crossed a field to get to the road leading to Hams Hall.

As I found myself walking alongside another river, this time The Tame, I noticed a load of swifts flying around. “I wonder what they’re after?” I thought to myself, then after getting a mouthful of midges, I realised.

There were wall-to-wall midges. I was going to continue along the river but got off as soon as I could and made my way to Coleshill Parkway via the roads instead. Them buggers were everywhere !

From the railway station, it was almost the usual route back home. I say almost because, as I was notified sometime ago and promptly forgot, the footpath running parallel to Gorsey Lane was closed for the dreaded HS2. Not even the coronavirus can stop that ! No major shakes, I just backtracked and walked along Gorsey Lane instead, noticing the fence at the other end of the diversion. Reading my post from when I found out about the closure (LINK), back in February, is see that it could be closed until October.

Another couple of miles or so, through Water Orton, and I was back home.

Counting both walks together, I walked nineteen miles today. As my second walk was faster, I counted an hour from that to go towards my LDWA Coronavirus 100 Challenge, swapping it for the 4.1 I had logged, bringing it up to 51.7 miles in thirteen days – over half way.

The nineteen miles brings my #walk1000miles total up to 960 – only forty miles to go. If I stick to the training plan I should hit the thousand next Tuesday.

Oh, here’s a photo of me waving from the M42 Motorway bridge.