January the second and, unless you’re in Scotland, it’s back to work !

As I’m trying to use the car less, I jumped the bus into Birmingham with the idea of walking home post-graft.

After collecting something for dinner, I set my watch to walk, pressed start and walked the mile and a bit to work. Another mile bagged – only 988 to go.

I should get another six /seven miles under my belt this afternoon.

After work, I headed for the Grand Union canal which I followed for a couple of miles before turning off to follow the River Cole. 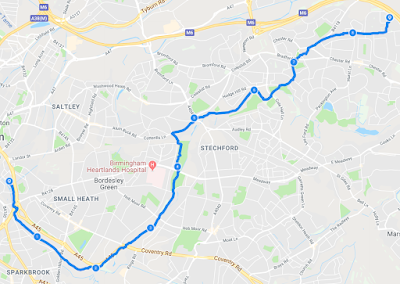 Apart from a brief section around Stechford, I followed the river to Shard End where we bid each other farewell. Another couple of miles along the streets and I was back home.

Nothing too exciting, or even mildly exciting, but it raised the heart rate and rewarded me with another 8.7 miles bringing the total to 20.7 miles – well on schedule.