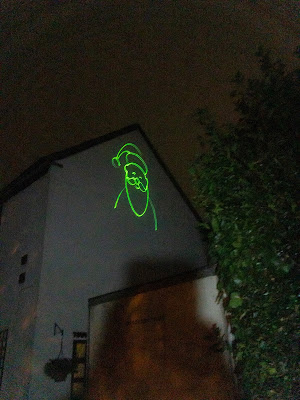 To get the ball rolling, I decided to take a walk to a couple of local towns (technically it’s a town and a village).

It was just getting dark when I set out and for the first mile or so I was walking along illuminated city streets.

Beyond this, as the street lights petered out, it was up to the trusty head torch to light the way.

Back on the roads, I came across a fancy Christmas lighting display. Instead of the usual fairy lights or projector, this show was drawn on the side of a house with a laser. The photo shows just one image from a thirty second animated display – I was well impressed.

One hour and forty three minutes after leaving home I had returned with seven miles in the bank – only 993 to go !

Thanks to a brace my knee was okay and a couple of Ibuprofen tablets would keep any swelling to a minimum.