Skip to content
Today I was on a course in Solihull so thought that I could walk home along The Solihull way / Green Man way. However, I needed to take some stuff with me on the course and didn’t fancy walking back with safety boots, high vis jacket and a hard hat.
Looking at the map. I noticed that the Grand Union Canal was not too far away so, perhaps, I could take a stroll along the cut?
I could park near to Knowle and follow the Grand Union to Chessets Wood where I would divert onto the Millennium way for about a mile before rejoining the canal for the return leg. A total of around seven miles.
When I was working in Redditch, I often parked up just outside of Knowle in a car park next to the canal and would walk a couple of miles along the canal either, North to Catherine-de-Barnes or South to The Black Boy pub – either route giving me a four mile, one hour walk. I had never been past the Black Boy pub, so today I would be boldly going where I had not gone before!
I finished, nay passed, my course just after four and was parked up and changed by 4:25. It was still light which made a welcome change.
The footpath was mainly good with a few muddy patches which could be circumvented. Two miles in, I passed the Black Boy and was into new territory. 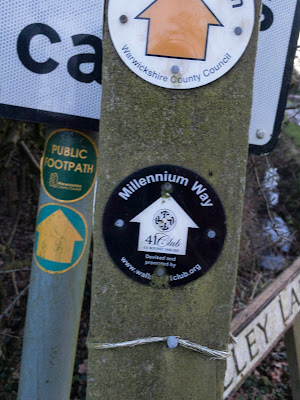 Another mile, as the towpath switched sides, I left the Grand Union behind and followed the signs for the Millennium Way.

As I was walking down Valley Lane, I espied a rustic-looking building belonging to Clive Pitt and Sons, Builders. As can be seen in the photo of the barn, there was a lovely preserved / renovated Moggie Minor tucked away. 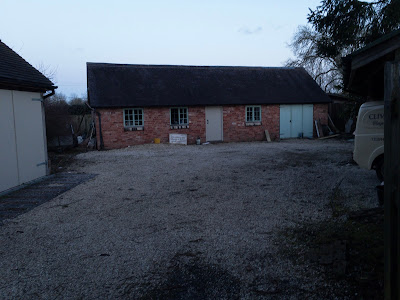 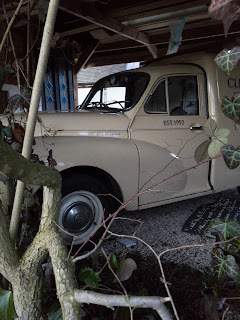 At the end of Valley Lane, I came to Valley Farm (probably from what the lane was named) and a muddy footpath leading off to the left. This path traversed a number of fields all, in various degrees, muddy.

Eventually, I reached solid ground at Rising Lane which I followed for a while before returning to the canal. It was just starting to get dark so I fired up my head-torch for the walk along the unlit road. On reaching the canal, it was dark enough for me to need the extra light to negotiate the very muddy bits along the towpath. 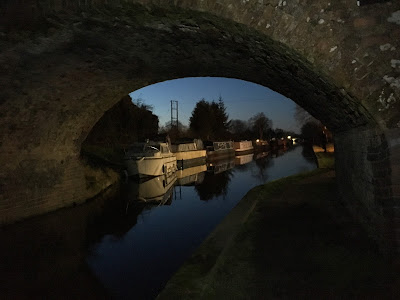 A mile and a half back towards Knowle, I passed under a bridge to return to The Black Boy. Only two miles to go. 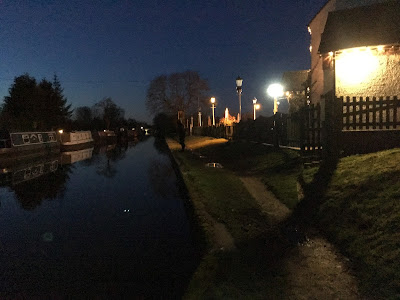 The last two miles were fairly uneventful and I arrived back at the car one hour and fifty two minutes after leaving having covered seven and a half miles. With all the mud, my pace was not great – 14:53.