My knee is still playing up. It’s swollen and sore but doesn’t get any worse when I exercise.

I suppose that I should rest it properly but now I’m getting back into the swing of regular activity, I don’t want to stop. I’ll try to keep the impact to a minimum and do more walking instead of running.


On our first day back home, Sue had arranged with daughter number two to get some retail therapy which they would obtain in Solihull. I tagged along as far as Solihull where we parted way.

My way was the Solihull Way which winds it’s way from Earlswood to Castle Bromwich. I joined for most the Northern part.

From the shopping centre, the route takes the walker to Damsonwood, joining the Grand Union Canal at the interestingly named Lugtrout Lane. The canal is followed for about a mile until the giant Land Rover Works on Lode Lane. A winding path skirts Land rover emerging at Elmdon Park.

Paths cut through to the A45, Coventry Road, before a newly laid track heads past the airport to Marston Green from where Kingshurst Brook is followed to Chelmsley Wood. The Solihull way continues away from the main roads towards Castle Bromwich Hall but I left as it passed the bottom of my road. 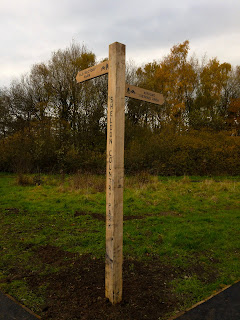 The whole of walk I took was on ‘proper’ paths and I avoided getting muddy – makes a change.

All in all, I covered 9.5 miles in a little over two hours.