After a restful night, I was up early to explore the area around our cottage. 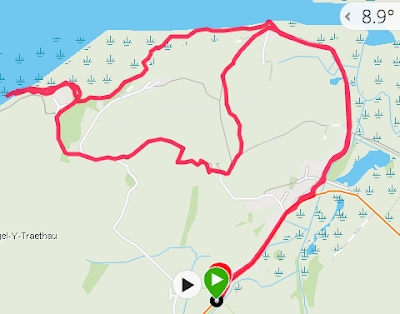 I headed along the edge of the main road (not too busy) before turning off and heading for the river’s edge; the river in this case being Afron Dwyryd. Following a path of decreasing width, I came to the water and turned left picking a path along the salt marsh.

As can be seen from the map, above, my course went through those little green reed symbols which translates as mud! After some ten minutes of this I gave up trying to do anything more than a squelchy walk and did a one-eighty, leaving the wetness behind.

A path lead up a hill to, in the middle of nowhere, a little church – Llanfihangely Traethau.

From this lofty position, I descended the hill returning to the path I’d taken earlier which now became a path of increasing width.

What should have been an easy couple of miles turning into an arduous three and a half but I was feeling good when I got back to base.

That’s all the running / walking for today but I’m becoming a parkrun tourist tomorrow with a visit to Dolgellau.