Reading through, probably, last month’s Country Walking magazine, I happened upon an article about waterproof jackets and the need to, periodically, re-proof them.

It got me thinking. “When did I last re-proof MY jacket?” “Have I ever re-proofed my jacket?”

Anyway, when I was in Go Outdoors last week (they had a sale on, you know?) changing my Garmin Fenix, I was mooching around the store, picking up some odds and ends, when I came across this stuff …

According to the label, this stuff will clean and then re-proof my waterproofs. The instructions go on to mention that it’s recommended by Goretex of which my Sprayway jacket is made.

I bought a bottle of Granger’s Wash + Repel (along with a new Rab base top).

Yesterday, I bunged my Sprayway jacket and Rab soft-shell into the washer-drier along with some of the magic liquid and let it do it’s stuff. The Repel bit of the product is heat activated – hence the drier. 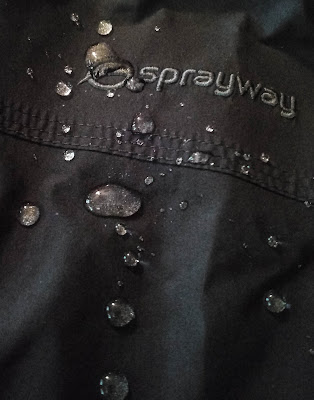 A couple of hours later and the washing was done. My gear was nice and dry so the first thing I did was wet it.

As you can see, the water forms nice beads on the surface of the jacket instead of soaking in.

The only real test is to go out in the rain so I’ll have to reserve final judgement until after the rains but it looks promising.