Skip to content
After a rest day on Monday, yesterday morning, after my night shift, I was running through the fog along the canal. I had 4 miles to cover so ran along the Grand Union Canal turning around at The Ackers. It was a great run – the fog muffling the usual traffic din and the lights on the buildings sending eerie shadows across the towpath – very atmospheric (literally).
Wednesday, again after work, I was, again, on the canal but going in the opposite direction. I ran as far as Star City before doing a 180 to collect the car from work. Arriving home, I would normally have gone to bed but today I had a rendezvous at 11 in Birmingham.
I waited at New Street Station and around 11 I was shaking hands with my younger brother, Ben. We had arranged to walk along the canals perhaps grabbing a pint en-route. 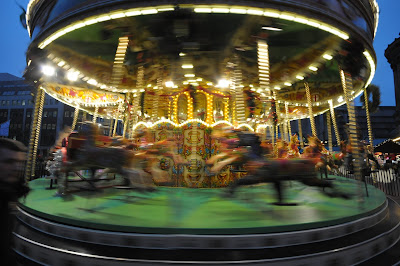 After walking through the German Christmas Market and making a loo stop in the ICC, we joined the canal network at Brindley Place. 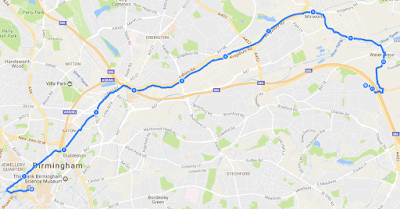 We descended the 13 locks that make up the Farmers Bridge flight before turning left unto the Birmingham & Fazeley Canal and another 11 locks before coming to Salford Junction or if you were driving, Spaghetti Junction. 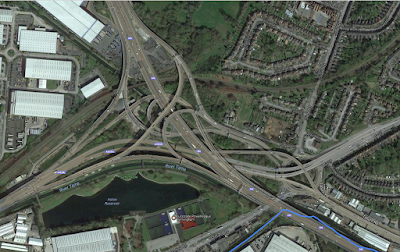 After a right turn, we continued along the Birmingham & Fazeley for another 4 miles, dropping down another 3 locks until we arrived at Minworth and The Boat Inn. After 8 miles, this seemed a good place to break for lunch.
It’s been a while since I last visited this establishment so didn’t know what to expect. The beer (EPA) was alright but the menu was rather uninspired. One veggie choice (omelette) and everything else was either chicken or burger – even the breakfast was burger (no sausage, no bacon). I opted for a bowl of chips.
Post lunch, we left the canals and made our way to Water Orton and back home. Looking at the times in de-briefing, the effect of the beer (or the chips, perhaps) was noticeable with our pace a good minute a mile slower.
We had decent weather and the chance of a good natter and a catch-up. On departing, Ben offered to give me a guided tour of his local area – now that could well be a little hillier than we encountered today – he lives not far from the Brecon Beacons !