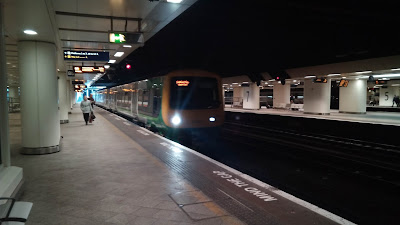 As a treat to myself, I’d planned a little walk along part of the Heart of England (HofE) Way. The full length of the HofE runs from the north of Cannock Chase to Bourton-on-the-Water – a distance of 100 miles. The bit I did was from Lichfield to Shustoke.

It all started with a train ride from Birmingham to Lichfield City. 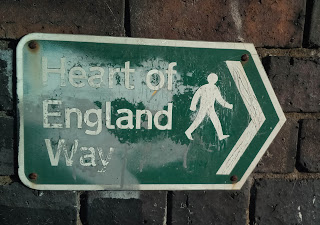 From the station, the HofE winds through the streets of Lichfield until it reaches the A51, Tamworth Road.

Across the road, I noticed a sign for the Lichfield Canal. This is a major on-going project to re-instate the canal which fell into disrepair in the 60’s.

I made a bit of a diversion here and walked a half mile along a section that had been reconstructed including the water. 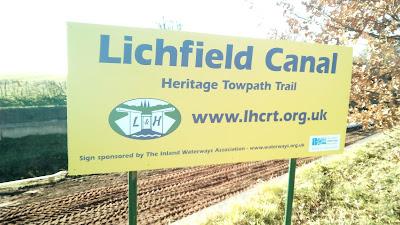 Rejoining the HofE for a short stretch along the Tamworth Road before I turned off onto a bridleway which ran roughly parallel with the road. 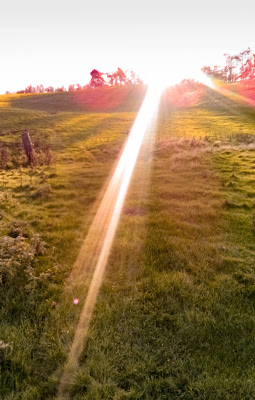 It was a gentle, slightly uphill stroll passing a number of the famous Staffordshire pigs, before crossing over the A5 near Hints.

With the low winter sun getting even lower as the afternoon wore on, I climbed a bit of a rise at Gorsey Hill with the blinding sun in my eyes.

Over the hill (did I mention I was 58 today?) I dropped down to the busy A453 taking my life in my hands by walking along it.

Luckily it wasn’t for very long and I was off that road onto the quieter Drayton Road heading for Drayton Bassett.

Exiting Drayton Bassett, I crossed the A4091 to the Birmingham & Fazeley Canal, crossing over to the footpath by this elaborate bridge … 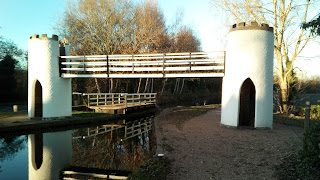 As I proceeded along the cut, I was accosted by a big barking dog (as in woof-woof not as in “I’m a tea pot”). “He doesn’t usually bark”, explained the owner. “Lucky me!” The tail was wagging so I chanced a stroke – and he was fine – “Good Boy!”
A couple of miles further along the golden tree lined canal, I exited to Kingsbury Waterpark. I was well ahead of schedule here and thought that I could waste a while with a hot chocolate at the park cafe. Unfortunately, it was closed 🙁

Leaving the closed cafe, I was confronted with two green signs, HofE and The Centenary Way. I’d better make sure that I follow the right one.

Luckily, the two ways split soon after with the Centenary heading for Atherstone and yours truly heading for Kingsbury village.

From the village, the HofE headed towards Hurley passing a scary rifle range. 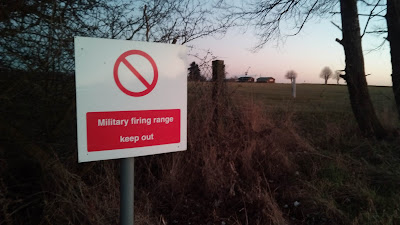 As the sun sank below the horizon, it was on with the head-torch and up a long hill to Camp Farm and the outskirts of Hurley. 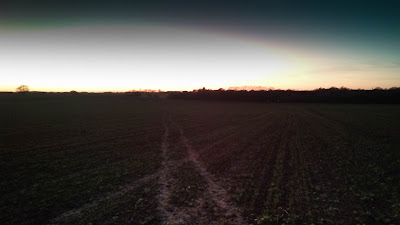 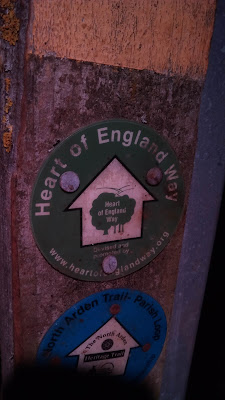 After a few more fields, including one with a highland cow, I was at Whitacre Heath and well ahead of time. The pub (The Griffin) where I was due to finish would not be open until 7 (or a tad before, if I was lucky) so I had about an hour to fill.

I was on home turf now so using my local knowledge, decided to head for Shustoke village and make a loop to come at The Griffin from the other side. This added another couple of miles and I arrived at The Griffin, having walked another bit of the Heart of England Way, around 18:40 – just as the owner rolled up.

“I thought that might be you”, he stated.
“Why’s that, then?” I enquired.
“You’re the only person I know daft enough to walk to the pub at this time!”

I enjoyed a pint or three at The Griffin before the other half, who’d met me there, drove me home via the chinese takeaway (another birthday treat).
During my walk, after 19.5 miles, my GPS watch gave up with a low battery so I started the endomondo app on my phone and merged the two tracks when I got back home. The total mileage was 24.3 miles and it took me just over 6 hours to walk that.