Last of a stint of four nights where I’d managed to clock up 16 miles by walking 4 miles each night.

I finished work at 7 on Monday morning and left work for the M42. Instead of exiting by the NEC and heading home, I continued up to junction 9 from where I made my way to Bodymoor Heath where I parked up alongside the Birmingham Fazeley canal. 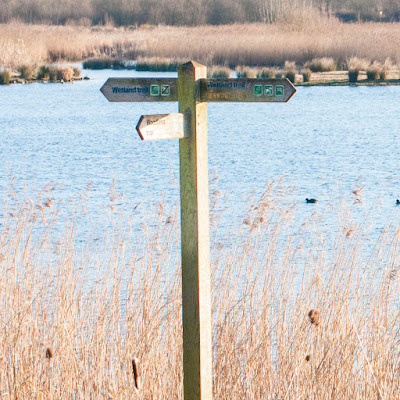 After a few hundred metres along Bodymoor Heath Road, I turned off to cross a field coming out on the deeply rutted and muddy access road to the RSPB’s Middleton Nature Reserve.

A pleasant walk of around a mile took me over the canal and into the Middleton Lakes reserve which was opened in 2011 and covers some 160 hectares or nearly 400 acres, in the old money.

There is a choice of walks around these former gravel quarries and I chose the Wetland trail of 2 miles length.

At the Northernmost point there is a newly build brick hide where I sat for a while watching the wildlife.

I saw ducks, swans, geese and a cormorant before deciding to continue my walk.

The River Tame cuts through the reserve and although a footpath is shown on the OS maps crossing the river, all satellite imagery shows no bridge to get over. A few years ago, I even walked the footpath and could find no bridge.

Today, I saw this…

… a new bridge. Further research, back home, reveals that this was opened in 2014. A track on the far side leads up, through The Midland Diving Centre to the A51, Tamworth to Coventry Road. I’ll try this one day as after around 100 metres along the road, the pavement starts and continues all the way into Kingsbury.
Arriving back at the canal, I headed for Kingsbury water park where I did a circuit of a couple of the pools before returning to the canal and back to the car.
I’d had a very nice walk in the early morning sunshine which I’d have liked to have been longer but I had to get back for a dental appointment (no – it wasn’t a two thirty!)