Loading...
Skip to content
After a few days off from work, it was back to reality today.
I left for work mid-afternoon and got as far as Hockley Heath before parking up and heading for the Stratford canal. 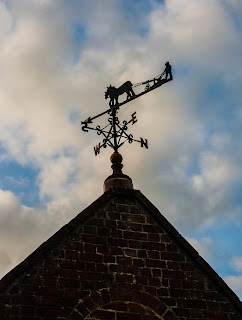 I have walked this stretch a number of times but usually in the dark so it was nice to have something more to look at in the daylight.

After 2 and a bit miles I came to a parting of the ways at Kingswood Junction and I chose the link to the Grand Union canal.

Originally, boats from Stratford-upon-Avon had to go up a lock at Kingswood then down another lock to get to the Grand Union. Someone then had a brainwave and built a lockless section joining the two sections.

I took the 250m long arm then turned left on reaching the Grand Union. Less than a mile later, I left the canal at Turner’s Green passing Turner’s End Farm with it’s impressive weather vane

Finwood Road was followed for a mile or so, up and over the M40 passing a couple of houses which are marked on the map as Finwood. Just after Finwood was the village of Lowsonford where I re-joined the Startford canal for the return leg back up (literally) to Hockley Heath.

At lock 28 was a photogenic cottage which I stopped at to take a snap or two before continuing back to Kingswood and thence to Hockley Heath.

Just before journey’s end I spied a Robin flitting between branches so just had to stop and whip out the camera.

Arriving back at the car, I grabbed my wallet and nipped across the road to the excellent Nelson’s Fish and Chips for a fish supper to fuel me for the next 12 hours at work.