Sue was out Saturday night, expecting to be back late. I was at work on Sunday so had an early night hoping to rise early and get a walk in before work.

I got ready for work, put on my walking gear and opened the front door. Wow! It was snowing!

I cleared the car, drove to Coleshill and parked in up Morrison’s car park.

I walked along the bypass (A446) crossing over the River Cole before heading back to the high street. I stopped for some photos at the bridge at the bottom of the hill before ascending to the church for more photos. 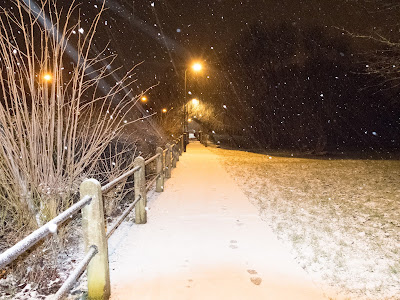 After a chilly photo session, I continued along High Street, past my old school before turning onto the bypass and making my way back to Morrison’s.

I hurried to work, although not as speedily as usual due to the, did I mention it, snow.

Later in the day, I squeezed in another 4 miles at work bringing the weekly total to 50.3 miles.