Well that’s that for another year !

Walk-wise, what have I achieved? 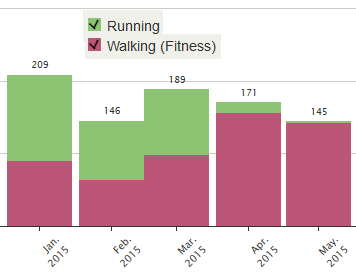 The year started off slowly with not enough miles walked although I did manage a few miles running in preparation for the Coventry Half Marathon which I completed in March.

I was a bit short on time, I seem to recall, so I was aiming on getting my exercise done in less time.

I did get a bit caught up in the running scene, so much so that I planned on a couple of marathons this year.

Unfortunately, as has happened before, I succumbed to injury and had to call a halt to the running and concentrate on something more pedestrian (but only just!).

My good lady wife was working in Tamworth until around April and I often met her from work or went into work with her and walked back. Later, Sue’s work moved her to Moseley which is a few miles closer to home and a couple of miles from Birmingham city centre, providing plenty of options, walk-wise.

In April, partly to make up for the loss of miles after curtailing the running, I started to do circuits of the buildings at work. A single lap is a quarter of a mile so I can clock up 4 miles during an hour’s break.

My first challenge walk of the year was not until August and the Dovedale Dipper.

October was the month for the inaugural Heart of England Forrest Walk and also the ever popular Rowbothans Round Rotherham walk. I excelled in Rotherham, completing the 50 mile course in 12 hours – an average of 4.3 mph !

The following month was a little fallow caused, in part by recovering from Rotherham and partly by going to the US of A where I took it very easy.
Things picked up towards the end of the year ending with an annual total of 1,630 miles or about 137 per month. 2,016 miles in 2016 looks possible – I think.