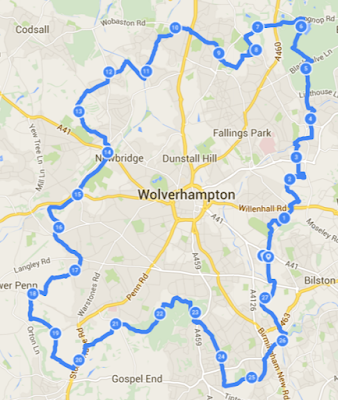 Up bright and early, although nether I nor the day were that bright at 6am!

A bit of brekkie, a last minute check of the backpack and I was on the bus heading for Birmingham by half six.

A short walk to the metro station only to discover that Snow Hill metro is temporarily closed whilst they build the ‘new’ station. A replacement bus service relayed me to the next station up the line from where I caught the tram to Priestfield near Bilston.

I started my walk at 7:46, choosing to go around anti-clockwise. 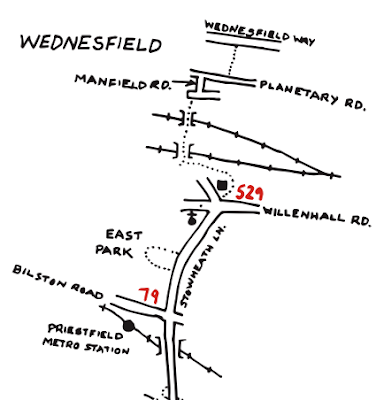 The ‘map’ that I was following was the official map available here.

Not too detailed but just about enough to go by.

Soon after starting I reached East Park where there is a bit of a loop shown on the map. I entered the park but could find the exit back onto Stowheath Lane so had to improvise a little.

The next half mile or so was on the roads until cutting across country and my first mud of the day.

Key Industrial Park was the site of one of my navigational hiccups where I had to backtrack (Nav-error #1) to find a well hidden path leading to Wednesfield and New Cross where I joined the canal. 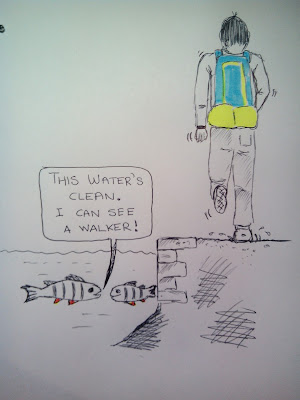 The water in the canal here is very clean; clean enough for me to see a couple of perch swimming along.

After about a mile of canal, it was through the houses again before a muddy track lead me to the busy Blackhalve Lane, near Essington.

A slightly scary walk along Blackhalve Lane was thankfully short before turning right on to another muddy track which eventually brought me out opposite Bushbury cemetery. I think that this was the only time on the walk that the sun came out!

At this point, the sketch map showed the route continuing over the road and the OS map did indeed indicate a footpath so I followed it – through the cemetery. After a while, I realised that the footpath didn’t actually go this way so had to make another backtrack (Nav-error #2.)

Further down the road, I found the path and using this, climbed to the top of the hill, which at 184m high gave great views to the North West. 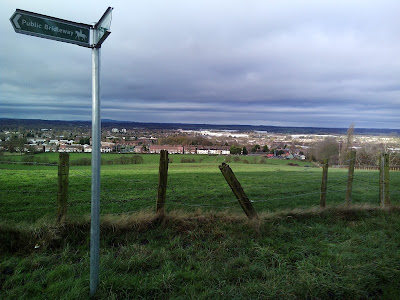 Dropping down in Bushbury proper, it was another couple of urban miles before finding the Staffordshire & Worcester canal. This was followed, turning right at Autherley Junction onto the Shropshire Union. 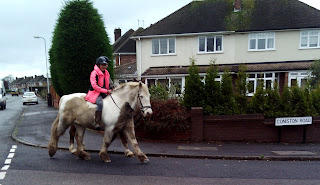 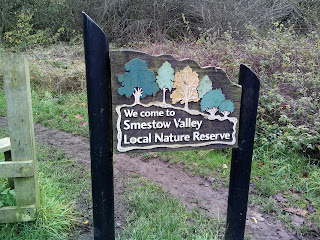 The canal system was left (for now) for a bit more urban walking countryfied by seeing a couple of horses trotting down the road.

A walk through a golf course, brought me to the picturesque village of Newbridge.

I’ve only just realised that I made another Nav-error here by descending a muddy bank onto the canal when I should have used a disused railway instead, joining the canal later.

Anyway, the canal was followed for a couple of miles until Smestow Valley Local Nature Reserve where a very muddy track took me to Castlecroft and Merry Hill – not the shopping mega-mall !

Leaving Merry Hill along a path with signs warning of flooding, I was soon in Orton having passed through Lower Penn.

There was a half mile of steep uphill to a trig point at 163m. From here it was all downhill to the A449, a busy dual carriageway which, luckily had a much quieter service road running alongside.
I, carefully, crossed the A449 and ascended to pass St. Anthony’s Cheshire Home and then joined a bridleway. I assume that it was a bridleway as there were half a dozen horses blocking it. One of the riders was on her mobile, sounding quite worried and asking for assistance. The words horse, leg and blood were mentioned but as I squeezed past the equine roadblock I saw no signs of injury. 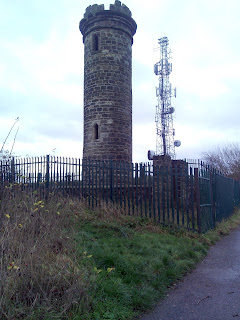 At Penn, I took the minor road to the Barley Mow pub before following another muddy, and in places, very muddy, path to Park Hill.

The route dropped down to the A459 before climbing steeply to Cinder hill with it’s old tower and modern radio past – Two towers but hardly Tolkein!

At 238m, this was the highest point of the ring.

The road dropped down towards Sedgley passing the Sarah Hughes brewery. With great will power I walked on by!

The last green path was followed a short distance before walking through the suburbs of The Coppice and Roseville, rejoining the canal at Coseley.

A mile and a half later, I bid farewell to the canal Birmingham Canal for the final half mile back to the metro station at Priestfield.

As I walked down the ramp to the station, I pressed STOP on my Garmin, looked at the display and saw that I had covered 28 miles exactly.

Without my few Nav-errors, I reckon that the Wolverhampton Ring is 27 miles long. I also reckon that I did it the wrong way around as on later inspection, some of the notes on the official map make more sense if going clockwise.

All in all, a good day’s walking seeing many new parts of Wolverhampton.

In the summer, with less mud, this could be a very pleasant walk.

Weekly total has shot up to 40 miles.