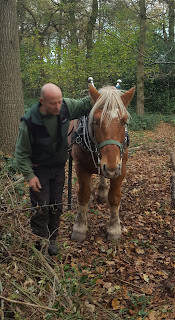 Night shifts over and in to bed for a few hours sleep.
I had some cinema tickets (courtesy of Times+) for tonight so had arranged to meet Sue from work to arrive at Five Ways for 6pm.
I left home around half two and headed for Kingshurst from where I’d pick up the Cole Valley Walkway.
The first mile was through the houses but once at Yorkswood, I would be off-road until Sparkhill which is only a mile from my destination.
There were a number of school kids (with teachers) in the woods (Forest School, apparently) and turning a bend I came across a man with a horse who was telling the kids all about it (the MAN was talking not Mr. Ed!)
I had to take a photo being careful not to point my camera at any children!

The rest of the walk was pretty uneventful listening to Radcliffe and Maconie on the radio. I even managed to work out the Tea Time Theme Time puzzle 🙂

I reached Moseley around 4:45 so had time to grab a few nibbles from Sainsbury before meeting the other half. 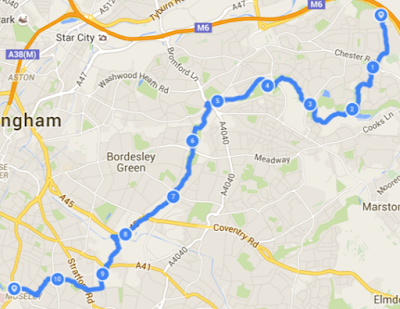 Today, I managed a walk of almost 11 miles being on my feet for nearly two and a half hours – average speed of 4.5 mph.
We’ve got another freebie film tomorrow but that’s at Star City but I’ll probably walk in to meet Sue – this time via the Birmingham Fazeley canal.