I am Kev and discovered the sometimes strange world of long distance walking earlier this year.

Towards the end of 2012, I changed jobs to work at a site which was just over three miles from home. In February of this year ( 2013 ), I thought that I’d try walking to work. That day I walked about seven miles to and from work without any ill effects. I did this a few times then started to add extra milage to ( usually ) the home leg. After a few weeks, the weekly milage had crept up to forty odd miles and I was feeling good – and getting fit 🙂

I come from a running background ( on and off over the past twenty five years or so ) and wondered if there where any organised walking events that I could take part in. After a bit of searching, I discovered the Walk for Kids, advertised as a twenty six mile walk around Birmingham, roughly following the outer circle bus route. It was free to enter so in May, I set off from Erdington and circumnavigated Brummagem arriving back some five and a half hours later. I finished comfortably with no ill effects on the following days.

After the Walk for Kids, I felt that I needed to do something a little more challenging and after more searching, I found the Thames Path Challenge. This event was organised by a company called Action Challenge and required me to raise £400 for a charity of my choice. I chose Macmillan Cancer Support. The challenge, which was to walk 100km, 62 miles, along the Thames Path from Putney to Henley-on-Thames was to take place on September 14th. I needed to get some proper training in !

Apart from walking to and from work and the occasional longer walk, I created a training plan which included increasingly longer weekend walks, the longest of which was forty miles.

During my searches for information on long distance walking, I discovered the Long Distance Walkers Association ( LDWA ) which amongst other activities organises many challenge walks of around marathon distance. I signed up for and completed walks in the Peak DIstrict ( Dovedale Dipper ) and Sandwell ( Six Towns ). 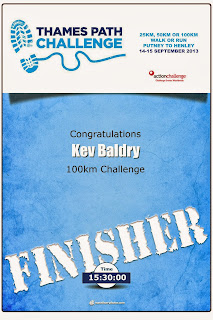 In September, I successfully completed the Thames Path Challenge, walking the 100km in fifteen and a half hours. Apart from some aches immediately after, I was fine the next day. Everything had gone to plan from the training to the drinks and food stops.

Looking for my next challenge, I have set my mind on walking one hundred MILES in one go. The LDWA organises an annual hundred miler and in 2014, this will be held in South Wales. Part of the entry conditions is proof that the entrant stands a good chance of finishing and there are a number of qualifying events. The last one for this year is the Rowbothan’s Round Rotherham event – 50 miles, as the name suggests, around Rotherham. I have this to complete in two weeks time.