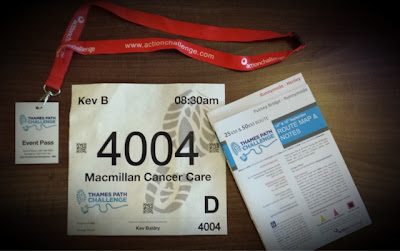 After a good night’s sleep at my hotel in Chelsea, I was up, dressed and breakfasted by seven. After checking out, a short walk brought me to the bus stop for the 424 bus to Putney Bridge.
Just as I was getting off the bus, I had my first phone call of the day offering encouragement for the forthcoming venture. I made my way to the start compound where I dropped off my overnight bag with which I would, hopefully, be reunited in Henley.
I grabbed a cup of coffee and some Jaffa cakes and sat down waiting for my start time of eight thirty to roll around. On my table was a chap who hailed from Warwick with whom I had a bit of a chat to while away the wait.
The organisers were releasing participants every fifteen minutes after giving them a pep talk and a bit of a warm-up. The two girls who were leading the exercise must have been well warmed up by the end of the morning after doing the same routine four times an hour !
Eight fifteen came around and we eight-thirty starters were called into the starting pen for our pep talk and warm up. It was soon half eight and with much ceremony and the obligatory countdown we were off following the little pink arrows which marked the route.
All started well as we jockeyed for position crossing Putney Bridge, picking up the Thames Path on the south side of the river. I was expecting to be walking through a predominantly urban environment but it was all very green through the trees and past the various rowing clubs. I could make a cheap joke about rowers tossing their cox into the river – but I won’t lower myself.
For a while I walked with a small group with which we exchanged our reasons for doing the challenge. For some it was the challenge itself whilst others were doing it, primarily, for their chosen charities. 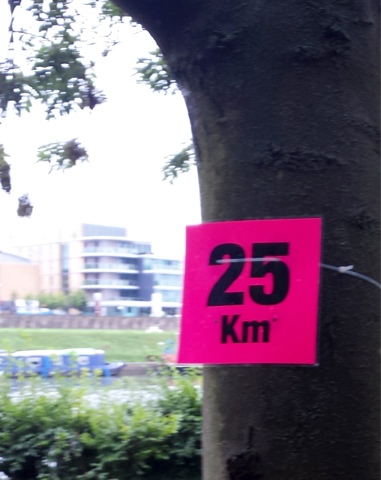 I had a few more phone calls during the morning which were very much appreciated, geeing me up a bit.
The late morning drizzle stopped as I continued through Staines-on-Thames which used to be called just Staines. I’m not sure wether adding -on-Thames makes it sound any better or not !
I arrived at the half way point at Runnymede just before four o’clock having covered 31 miles in just under seven and a half hours ( 14:22 minutes per mile ). I took a break here having a big plateful of pasta and some carrot cake. I changed socks and re-vaselined body bits before getting back onto the walk heading towards Windsor. 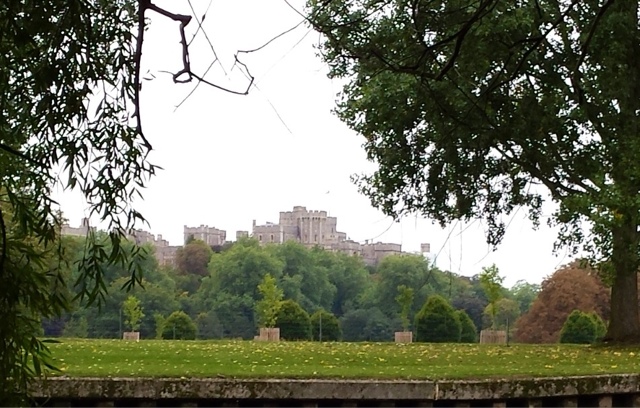 The first place to pass was Old Windsor where I espied a couple of wild parakeets. The path then took a torturous route around Windsor before crossing the bridge into Eton and turning left to follow the river towards a feed station at Eton Wick. This halt was off the main path and as it wasn’t obligatory, I skipped it and carried on towards Eton Dorney, home of the National Rowing Centre.
It was getting dark as I walked through Maidenhead so it was on with the headtorch for the remainder of the evening. The torch lit up the reflective strips on the pink arrows beautifully and the addition of glowsticks made the course easy to follow in the dark. There were a few places where a few more arrows or glowsticks wouldn’t have gone amiss but as I never got lost, there must have been enough. I passed through Cookham and Marlow ( where I was treaded to a magnificent firewook display ) and Hurley through patchy mist ( or was it fog? ). 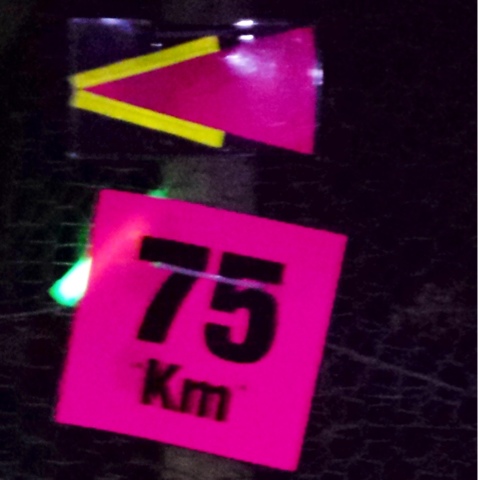 From here, I left the Thames behind for a while and found a few hills; nothing major but not what you need after fifty odd miles. Even more unwanted were two stiles. As I approached the first, I could hear someone reciting the Roger Mellie’s Profanasaurus ( with readers of Viz will be acquainted ) – she was not a happy bunny !
After a few more ups and downs I was back at the river by the bridge into Henley. Instead of crossing it, the course followed the north bank. After a couple more kilometres I saw the bright lights of the finish ahead and even though the distance markers only said 96, I was sure that this was the end.
However, as I approached the lights, I noticed more pink arrows directing me further long the river. I had to travel another kilometre or so before turning around and heading, finally, for the finish.
The bright lights and the big finish banner appeared from the mist and when my headlight was spotted by the helpers there, a cheer arose which dragged my over the line some fifteen and a half hours after leaving Putney. 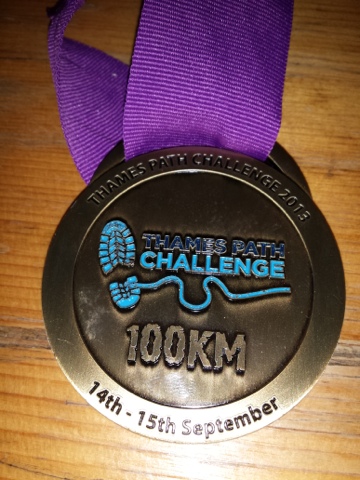 The first thing I was offered after finishing was a glass of champagne which I gratefully drank before collecting my stonker of a medal and tee-shirt. Apparently, I was the first 100km walker to finish ( not necessarily the fastest as others started after me ). I grabbed a big plate of food to replace some of the nine thousand calories burned during the walk. I recovered my bag and changed clothes adding a few extra as I was feeling decidedly chilly now that I had stopped.
After food and a short rest, I got all my bits together and set off for another walk, this time back to the B & B in Henley. Luckily a very kind couple took pity on me and gave me a lift to the bridge from where it was only a short stroll to my bed.
I didn’t sleep too well as every bit of me ached but on waking and taking a few, stiff, steps around the room, I discovered that I could still walk – which was nice. After breakfast, I drove back home to Brum.
In the evening, I was dragged off to The Griffin for a celebratory drink ( or three ). Here I was joined by my good friends Eric & Jeanette who had been following me on Endomondo and sending me messages of encouragement.  I also had a few “well done”s and also had another tenner donated for the cause, bringing the total up to £640. Hopefully, there are people who were waiting to see if I could actually do it before donating so now is your time. As a reminder, you can donate by either…
going to www.justgiving.com/kevbaldry  or
texting kevb62 a space and the amount to 70700
Conclusion
One hundred kilometres is a long way.
If travelling straight up, 100km is the height at which earth’s atmosphere ends and space begins.
One hundred kilometres can be walked, I won’t say comfortably but without too much discomfort, with adequate training.
The organisation was excellent. The route was well signed throughout and there was more than enough food and liquids at the feed stations. The helpers were just that – very helpful and encouraging.
The route was picturesque with plenty to see. Of course, after dark there was, save the odd firework display, only a pool of light from the headtorch to see, often through a fog.
I would like to thank, what I like to think of as my support crew, all those who phoned me or sent messages from the tracker or via endomondo. These communications were greatly received and really helped me get through.
Would I do it again?
Whilst the walk was scenic with plenty to look at and the organisation was top notch, the cost was quite high. Apart from the £80 entry fee, there was a hotel and a B & B to pay for ( another £160 ), train fare ( £18 ) and petrol ( around £30 ). There was a fair bit of kit bought but this will be used elsewhere.
There was also the necessity of raising at least £400 for my chosen charity. Although I am glad that macmillan will be a few hundred quid better off ( even after deducting their fees to the organisers ) I wouldn’t feel happy asking for donations again to do the same thing.
The aftermath
It is Monday as I write this. My legs are not too bad and I’m planning on a six mile walk tonight after work.
I’ve got a twenty six miler over the hills of South Wales in a three weeks time and the Birmingham Half Marathon to run but after that I have nothing planned.
Looking forward – is ONE HUNDRED MILES possible ?