An early start for a twelve miles walk to Sandwell Valley for the Sandwell Six Towns Challenge Walk. The walk started at 8:30 so I had to leave home at 5:30 !

A nice walk along the Birmingham & Fazeley canal and then the surprisingly busy streets of Aston ( presumably, people going to work ), through Handsworth Wood before taking a footpath which led to Sandwell Valley. A total of 12.5 miles.
At event HQ, I registered and received the route description before settling down to a few slices of malt loaf before the start.
Eight thirty rolled around and around a hundred walkers and runners assembled and we were on our way.
The route made it’s way past the West Bromwich Albion football ground ( that was West Bromwich, the first of the six towns ) before going alongside the metro ( tram ) for a while before joining the Birmingham Canal Navigation in Smethwich ( Town number two ). From the old canal we descended to the new section ( well it was once ) and after a few twists and turns left the canals, for now, and soon arrived at checkpoint 1 ( CP1 – 6.5 Miles) where I had my control card stamped. 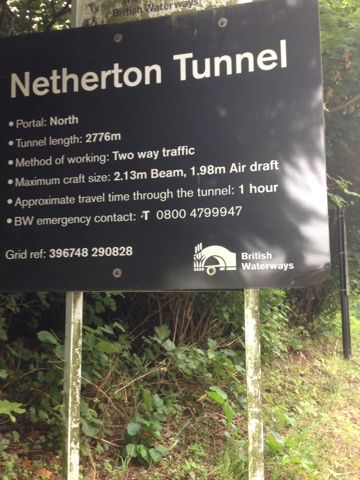 A bit more walking though the town of Oldbury  and making an unplanned wrong turn ( I wasn’t the only one who went wrong  – dodgy instructions ) and I arrived near to The Black Country Museum ( I recognised the viaduct and aquaduct ) and was back on the canal system heading for the Netherton Tunnel. This tunnel is about a mile and a half long and dead straight so that you can see the proverbial light at the end but it takes ages to become large enough to walk through. Emerging from the gloom and amazingly the GPS picked up my position and carried on perfectly. A short walk to the Bumblehole visitor centre in Rowley Regis and I was at CP2 (10 Miles) for some squash and biscuits.

A short retracing of steps bought me to one of the few climbs of the day but it wasn’t too bad and after another navigational glitch was back on the Birmingham canal heading for Tipton. The instructions, from here, said to carry on ahead for 4.5km until reaching The Fountain pub. With no other waypoints to tick off, this section of cut seemed to go on forever to the point where I started to wonder if I had gone wrong, even though there wasn’t really anywhere to go wrong. Eventually The Fountain ( Tipton ) was reached ( with much relief ) and a right turn before leaving the canal after a couple of sets of locks. The Prince’s End walkway was followed for a while before leaving that for the Tipton Leisure Centre and CP3 (17.8 Miles) 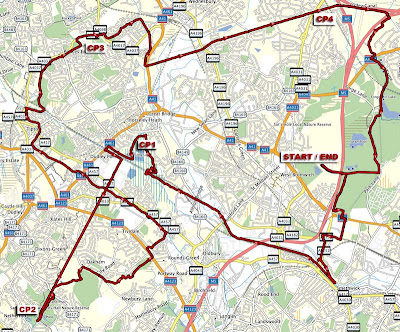 A stroll through a park, a bit of disused canal and we were on the Walsall Canal. This was followed for a while before branching off onto the Tame Valley at Ocker Hill ( Wednesbury ) making sure that I was on the correct side as there was a towpath either side. This section of the canal is as straight as Netherton tunnel but with a bit more to see. After a brisk 4.5 miles jomp I came upon the final checkpoint, CP4, at 21.8 miles. Nearly there.

The canal was followed for a while longer before branching off onto National Cycle Route 5 under the M6 sliproad to the M5 back towards Sandwell Valley.

A short section of Ray Hall Lane ( giving it’s name to the M5/M6 junction ) was followed before crossing the A4041 Newtown Road. It was at this point, whilst absent-mindedly walking up the cycle lane that I heard, “Mr. Baldry – get out of our cycle lane!” I was surprised to see that the request was from a couple of friends from Brueton parkrun, Larry and that minor running celebrity, Nick who were heading for Sutton Coldfield. After exchanging pleasantries, we departed and went our separate ways. Nice to see you, Guys.

The River Tame was followed for a while before leaving it behind and following Park Lane ( not the one of Monopoly Fame ) to a track that lead past the Sand Well ( from where Sandwell gets it’s name ) and the remains of Sandwell Priory before crossing the motorway and arriving back where I’d started from nearly six and a half hours earlier. 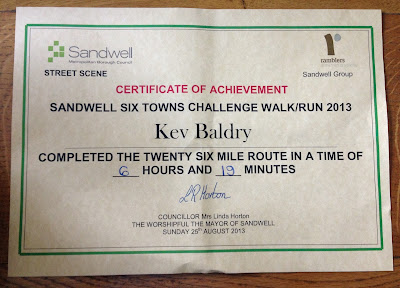 I entered the event marquee and was surprised, when I received my certificate, to see that I had completed the challenge in six hours and nineteen minutes.

So I managed to walk 12.5 + 26 miles = 38.5 miles in a day !
At the end I knew that I had done it but wasn’t knackered and even managed to run around the playground with my grandson on my shoulders a few minutes later.
Although the Thames Path Challenge is half as far again, I am feeling confident of completing it. I won’t be walking as fast ( I averaged 14:19 per mile today ) so should complete without too many ill effects, hopefully in around fifteen hours – fingers crossed.

I’m off to Luton for a few days ( training / induction for new job ) so may be walking around the Dunstable Downs in the evenings after work.