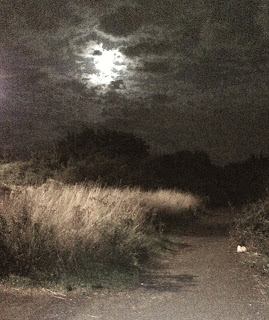 After work, I rushed home, got changed, put on the rucksack and set off on a fifteen mile night walk. As, at least, part of the Thames Path Challenge will be conducted at night, I need to acclimatise myself to the conditions.

Tonight wasn’t too dark as there was a full moon and mostly clear sky. In fact, in places, I turned off my headtorch as it was light enough to walk by moonlight ( sounds romantic, eh? ).

The first mile or so was suburban so the streetlights provided illumination but once on the other side of Water Orton, the torch was turned on.

Along the canal I strolled until I reached a footpath leading towards Marston, near to Kingsbury Water Park. Through an oasis of light, as I crossed the Kingsbury Road, then onto a track to Lea Marston.

On reaching civilisation, again, I made my way to Coleshill via Whitacre Heath and then home.

I was tired when I started ( the bed looked so inviting as I was getting changed, earlier ) but I’ll be walking tired in three weeks time so it had to be done. I also appear to have a dodgy rechargable battery amongst the three in my headtorch as the torch went into power saving mode which produced a dull, yellowy light instead of the usual bright white. Luckily, having the moon as backup, I was able to see where I was going without incident.

Arriving home even more tired, I treated myself to a peanut butter and banana sandwich ( don’t knock it until you’ve tried it ) before retiring.

I now have two rest days before the long, long walk on Sunday. I’m walking the Sandwell Six Towns event which is twenty sIx miles around Sandwell, including the 1.7 mile long Netherton Tunnel ( better get my batteries sorted out for that ! ). However, I need to be on my feet for around TEN HOURS that day so will be walking an addition twelve miles getting to the start. The event starts at 08:30 so will need to leave the house around 04:30 !!!

One thought on “Moonlight Meander”