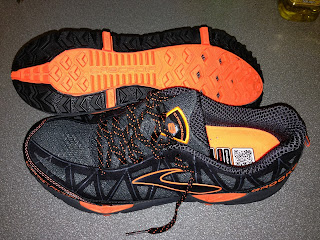 In five week’s time it’ll all be over !

A few things to report from the last week…

The shoes that were bought for the challenge have started to show signs of wear so a new pair is needed. Regular readers may remember that I was given a £25 gift voucher as a spot prize at the Arden Nine road race, redeemable at Birmingham Runner. So, after work on Thursday, I made my way to Shirley ( that’s the place, not some woman’s house ) to purchase a new pair of trail shoes. The chap in the shop was very helpful and brought me a selection to try. I finally went for the Brooks Cascadia. I handed over the gift voucher and my credit card. I also received a further discount for being a member of the Centurion Running Club.

Friday, I tried out the new footwear with a fifteen miler to meet the other half, Sue, from work. No problems encountered. 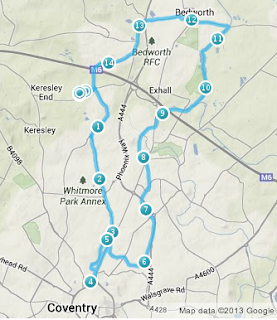 Apart for the aforementioned walk, I took to the streets, or more precisely, the canal towpaths, in the wee hours of Sunday morning finishing my twenty miles as the sun came up. At first there was a light drizzle, which looked much worse in the light of the head-torch but this stopped after an hour or so and the clouds thinned revealing the stars behind. The route that I took is one of my regular routes, albeit in reverse, but it did look very different at night. However, once I got into my stride, I made good progress. This route was also done earlier in the week; on Wednesday after work.

Sunday afternoon, I found myself, again, on the outskirts of Coventry with three and a half hours to kill. I walked into the city centre then jumped onto the Coventry canal and headed for Bedworth ( or Beduff, as the locals call it ). Three and a half hours and fifteen miles later, I returned to my starting place as Sue was finishing work. A change of top and shoes was made before retiring to The Griffin for a debrief.

Due to changing situations and a flexible training plan, I managed to clock up seventy eight miles and nearly eighteen hours on my feet last week – the most so far.

I’m planning to get the metro to Wolverhampton on Thursday, next week, and walk back along the canal. The plan calls for a seven hour walk so I may need to add a bit extra to this one. Then a five hour the following day so a longish walk back from Coventry may be on the cards Friday morning. 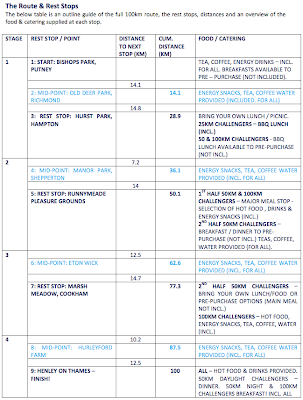 I got an e-mail, last week, with more details of the challenge.

I was worried about getting too late a start but I should be allocated a fifteen minute slot within the hour I chose when I signed up. Hopefully, I should be away soon after eight a.m. on the fourteenth.

A naff bit in the communication is that the baggage transfer will cost me £7.50. I may be able to carry what I need from the night before – we’ll have to see.

This big walk, apart from the difference in distance, is a lot different from the Dipper. For a start, it’s costing me a fortune with the entry fee, accommodation, transport and, possibly, baggage transfer. The dipper was also a lot less formal and felt friendly. At the moment, I doubt if I will do another big organised event like the Thames Path Challenge.