I was up early and out of the door by seven on Sunday morning, arriving in Hartington just before eight thirty. I soon found the event HQ, registered and received my control card. This had to be punched at each of the six control points to 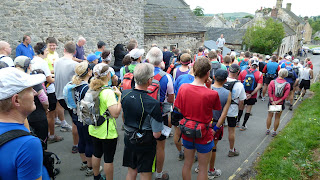 Just before nine the walkers lined up at the start ( runners set off at ten ) and after the safety talk a horn sounded, I started my GPS tracker and we were off.

En-masse, we strode down to the village square before a gradual climb into the countryside. At first it was difficult to get into a rhythm but as the group thinned out I was able to get into the groove and set my own pace.

After the first hour, a light drizzle descended upon us which was quite refreshing but this soon turned to proper rain. I stopped and put the rain cover on the rucksack but I find that walking in waterproofs, especially in the summer, I get as wet from sweat as I would from the rain. I do have a breathable jacket but I’d rather rely on wickable, quick drying clothing. The rain stopped about an hour later and I started to dry out. Apart from being wet, I wasn’t cold nor uncomfortable. I could have extended the alliteration in the title and called the Drenched Dovedale Dipper for we had a good soaking during the walk.

As you can see from the profile, the course was anything but flat with a killer hill after nearly fifteen miles. This was a real on the tips of the toes climb up a grassy slope to the top of Ecton Hill.
There was another naughty incline towards the end, with a climb out of the Dove valley.

I must be doing something right in my training because I did all the ups without stopping and a managed lot quicker than other competitors whom I passed on the way up.

I managed to maintain a pace of around fifteen minutes a mile and passed through the checkpoints collecting the required holes on my control card, cups of pop and biscuits to help me to the next one.

A number of runners shot past me and although the runners kept coming they were gradually getting slower and I was playing cat and mouse with some for a few miles with them tanking off down the hills and me reeling them back in on the ups.

Navigation-wise, it went well. There was usually someone in sight ahead of me so that I could see which was to go but on the quieter stretches the pre-plotted course on my GPS showed me the way to go.

The only bit where I strayed off-course ( walking a hundred metre of so more than I needed to ) was towards the top of the final climb. Near the top, the route went over a stile and diagonally across a field. As I approached the stile there was a family with a number of small children negotiating said stile. Instead of waiting I carried on along the sides of the field. Strangely, others following did the same; a case of the blind leading the blind ? 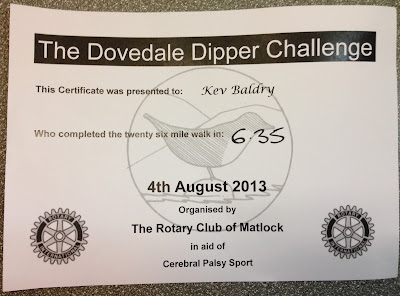 The last part was down hill back into Hartington where there were a few people clapping the returning heroes. I made my way to HQ and stopped my clock. I had walked a little over twenty six miles in six hours and thirty three minutes. I then entered the HQ and had my card stamped for the final time.

There were refreshments and more substantial fare for all the finishers and after a short wait I picked up my certificate as proof of my endeavours.

Conclusion
Before the event, I was somewhat concerned about the hills but I amazed myself as to how well I did; no-one overtook me going uphill !
Althought the course was rather undulating, I still managed an average pace of under fifteen minutes per mile ( four miles per hour ). In fact I was accosted at the finish by one of the runners who congratulated me and remarked on the speed, “You were going like a rocket,” he said.

A day later, I have no stiffness, no chaffage and although I am forcing myself to have a rest day, feel as though I could easily do a decent walk today. All in all a very positive experience.

Next weekend I’m scheduled to walk two days, back to back, hour hours each. I’m finishing work at half two on Friday so may well walk to Coventry ( to meet the other half from work ) and then on Saturday walk the other way ( getting a lift to Coventry ).