This week’s training schedule called for a five hour walk ( the training plan works by time on feet ) so using a conservative four miles per hour made that a twenty mile walk. 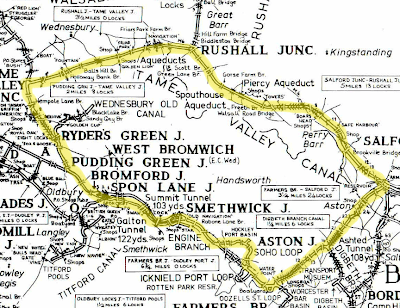 Consulting the charts, I created a twenty miler, all on the canals. After a gruelling morning at work ( stop sniggering at the back ) I drove the mile or so and parked up at Star City, hauled on the rucksack and headed for the Tame Valley Canal.

The first mile was rather noisy passing underneath Spaghetti Junction which on the BCN (Birmingham Canal Navigation) is known as Salford Junction before heading towards Perry Barr. 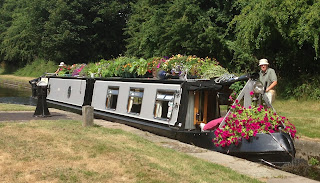 At Perry Barr locks, I passed a floating garden; a narrowboat bedecked with flowers. After exchanging pleasantries, I pushed on up the flight. All in all I did forty five locks, twenty one up and twenty four down. Who said that canals were flat ?

The sun was out as was the wildlife. I spotted loads of butterflies ( cabbage white, tortoise-shell and common blue ), dragonflies ( blue and red ones ) and a fair number of herons as well as the odd rabbit or two.

Today’s malfunction was only slight; my GPS tracking app stopped talking to me.I use MotionX-GPS to track my walks and it is set up to provide me with spoken updates every half mile, telling me how long, how far and my average pace. Today it stopped talking after four miles – the app recorded my walk alright but in silence.

At Rushall Junction, I bore right, away from the M6 reaching the Tame Valley Junction about an hour later. A few more locks brought me to the summit of the walk, a massive hundred and thirty metres above sea level. This was about half way around so I was now on the home leg and it’s all downhill. 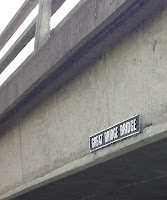 Shortly after Great Bridge, at Pudding Green, I joined the BCN Main Line heading for Birmingham. At Spon Lane the canal splits with the old line going up three locks before rejoining at Smethwich locks. I took the direct new line ( no locks ).

This is a popular stretch for walkers and cyclists. I’ll have to have a little moan, here, about some cyclists who ride past without warning. All they need do is give a short ting on the bell or a polite “excuse me” to let other users know that they are there. Moan over ( for now ).

The walking went well and I soon found myself in the heart of Birmingham, strolling past the National Indoor Arena ( NIA ) and the Sealife Centre before descending the thirteen locks which took me under the Telecom Tower. There were a lot of people about including the Special Brew drinkers enjoying the sunshine.

At Aston junction, I turned onto the Birmingham and Fazeley canal and down another eleven locks before returning to the car some twenty one miles and nearly five hours after leaving it.

Well that was twenty one miles, about a third of the distance to be covered on the Thames Path Challenge in seven weeks time. I have the Dovedale Dipper next Sunday so we’ll see how I cope with twenty six miles of Southern Pennine hills.