I usually do a longish walk on a Wednesday and today was no exception. I had planned to walk from work, along the canal system to Hay Mills then along the River Cole path to Chelmsley Wood to meet the wife at the gym at eight.

However, Sue changed gym so I had to re-route to Garretts Green instead planning on carrying on along the canal to somewhere near Olton. 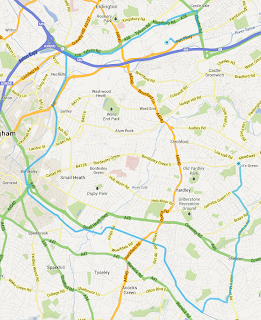 I started well enough, plugging my almost depleted phone into the battery pack to charge as I went along. I got onto the cut at The Tyburn House and set off towards Spaghetti Junction at a sprightly 13:30 pace.

At Spaghetti, I turned right onto the Bordesley branch arriving at Bordesley Junction some two and a half miles and six locks later ( who said that canals are flat? ).

It was during this stretch that my phone bleeped so I checked to see if it was anything important ( it wasn’t ) and noticed that it wasn’t charging – the battery pack was flat – note to self; check before setting off.

I was on 8% so I shut down the music player, wi-fi and cellular data to eek out all that I could and pressed on.

At the junction, I turned left onto the Grand Union. Shortly, I thought that I heard a firework but at half five, in the daylight? I turned a corner and there were two youths, one with a handful of rockets. “I heard that half a mile away”, I said. The rocket-man nodded at his accomplice, “It’s his birthday”, he stated. “Fair enough – Happy Birthday”, I wished and strode away.

The phone continued ticking off the half miles, still at around 13:25 pace ( cracking pace, eh Gromit? )

I passed The Acker’s Trust before realising that I hadn’t had an update recently. Looking at the phone confirmed my fears – I was all alone ! 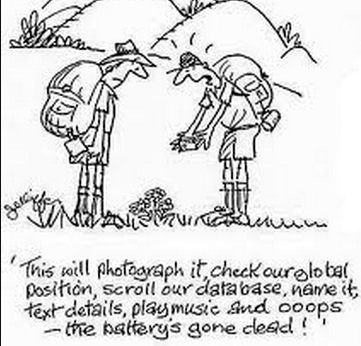 Now, normally, this wouldn’t be a problem but I had to meet Sue at eight. Not knowing how far I had gone ( or how far to go ), how long I’d been going or even what the time was made it difficult to time my walk to end just before the rendezvous time.

I reckoned that if I keep going at, what I perceived to be, the same pace I would get there with time to spare.

I got off the canal near Olton and arriving at the shops at Sheldon popped into Tesco for an ice cream and can of pop ( a change from luke-warm camelback water ). Striding off, licking my Crunchie Blast, I glanced into one of the shops, spotted a clock and panicked. Seven Twenty-Five and I estimated two and a half miles to go ( it’s nearer 2.7 ).

I couldn’t phone Sue to ask her to wait so I had to get my skates on ( obviously, not real skates! ). I walked as fast as I could with no way of knowing the time or how long I had.

I arrived at my destination to find Sue’s car unoccupied. Sue appeared seconds later. “What’s the time?” I asked. “Seven Fifty Eight”. Made it with two minutes to spare. Checking later, I did that 2.7 miles in thirty three minutes – 12:13 pace !!!

Drawing the route in back at home it appears that I walked just over fifteen miles.

That’s enough ( speed ) walking for today – I think that I deserve a rest day tomorrow.