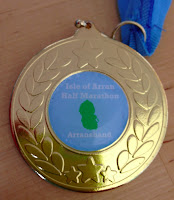 A bit different on the training front this week with a few early morning walks before the other half is up, a few walks together ( not as fast but still it’s time on the feet ), a few cycling excursions and of course, last Sunday’s half marathon.

It’s a rest day today but I’m hoping to get another hilly walk in tomorrow morning before we leave for the mainland.

Back to ‘normal’ from Monday so walks to and from work are back on the schedule.


Yesterday, I posted on facebook and twitter that it would be great if I could get to the all important £400 mark in my fundraising efforts. Very soon afterwards, I received a £10 donation followed a while later by another £20.
But the best was to come last night when I received a ONE HUNDRED POUND donation taking my total to a magnificent £440 🙂
When I signed up for the Thames Path Challenge I had to pledge to raise at least £400 in donations which I have now done. It has taken me just over a month to get this far so with a bit of luck ( and some generous friends and colleagues ) we can push this figure up.

As a reminder, you can donate in a number of ways…