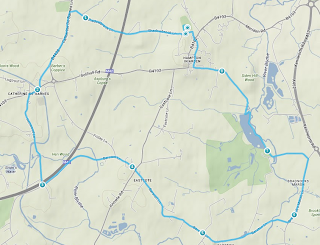 It was a damp, breezy morning as we arrived at Hampton in Arden tennis club for the 10th running of the Arden 9. Numbers were collected before chatting with fellow club members, people from parkrun and those met at previous races.

The weather didn’t look too promising, despite a guarantee of sunshine from one of the organisers ( you know who you are G ), but the rain held off for the 10:30 start.

We lined up in the road, according to our projected finish times. Jude, my running partner today, wanted to finish in under 1:20 which meant that we needed to run at a tad under nine minute miles, so we stood towards the back of the eight to nine minutes block.

I would like to say that the gun went off but I never heard any gun, whistle or even hooter; the mass of runners just started. I clicked the start button on my watch and off we went.

We managed to pace ourselves very well throughout the race and even managed the hill just after nine miles without slowing too much. Jude was hurting on the ascent ( she even said a naughty word ! ) but did well to keep up before the sprint to the finish. 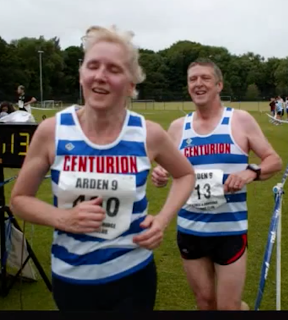 We looked up at the finish clock as Jude inched ahead on the line to see it read 1:19:12.

Well done to Jude for getting around within her, wished for, time and for stopping me from going too fast on what was, for me, only a training run.

We had a few very light showers during the race but the heavens opened shortly afterwards so it was back to the car and back home.

My next race is in a fortnight’s time – The Isle of Arran Half Marathon.