Skip to content
I have recently submitted this short article to the editor of the Centurion Running Club newsletter for consideration…
Thames Path Challenge
Towards the end of last year, I found myself looking for a new job which became my main focus in life. My running suffered, in fact it suffered so much that I stopped running all together. To be honest, I became lazy; as they say, the hardest part is getting out of the front door.
Luckily, I got myself a new job, located just a few miles from home which I was considering cycling to. At first, I was working shifts which entailed either a six am start or a ten pm finish. In November and December these were dark times and I never got the bike out at all.
One day, I decided to try walking to work. I checked for the shortest route using endomondo (an online GPS tracker) and found I would need to walk just over three miles. The next day, with a change of clothes in a backpack, I walked into work. I didn’t push it and caught the bus home after my shift.
From walking to (and from) work now and again I moved on to walking in and out most days with the occasional use of the car to get all the spare clothes, dirty clothes etc. in the right places.
My shifts changed so that I was now working eight until half four which was much more conducive to walking, i.e. not having to get up at silly o’clock and I started to add a little extra to my routes, coming home the ‘scenic’ route and the mileage slowly began to creep up. One afternoon I went the very scenic route and ended up at The Griffin near Shustoke, a distance of around nine miles. My wife was good enough to pick me up on her way home after she had finished work. That worked very well. With walking into work (around three and a half miles) plus the walk to the pub (another nine) I was easily clocking up twelve and a half miles in a day. This was to become the normal routine for a Wednesday with the afternoon portion eventually getting up to seventeen miles. 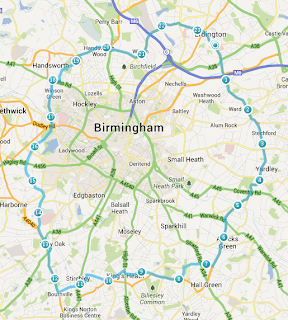 After a while I wanted to test the fitness that I hoped I had gained from the walks and I signed up for the Free Radio Walk for Kids, a twenty six mile route around Birmingham; what used to be called the walkathon. On Sunday, May 19th, I set off from Rookery Park in Erdington, roughly following the number eleven bus route, clockwise around Brum. I started off slowly as I wasn’t too sure how I would fair but as the miles went by I started to feel more confident and by the end, I was walking a mile every thirteen minutes. The twenty six miles turned out to be nearer twenty four but I completed it in just over five and a half hours at an average pace of 13:13 or 4.5 mph. Best of all, I didn’t feel difficult and I didn’t suffer in the subsequent days.
I needed something a bit more challenging. I looked at a few 50km walks but that distance is only a little more than what I had done, easily, and I finally went for a 100km, or sixty two miles, challenge, which I am sure will tax me.
The walk that I shall be doing on September 14th, is run by a company called action challenge and involves a walk along the Thames from Putney Bridge to Henley-on-Thames. To secure my place I had to pledge to raise £400 for a charity. After checking the different charities available and talking to my wife who has had experience with this charity, I decided to support macmillan cancer support. I signed up.
To help with the fund raising, I set up a just giving page (justgiving.com/kevbaldry) and started a blog (kevb62.blogspot.co.uk) to record my preparations. I have found a training plan which is similar to the running plans with, typically, a long walk at the week ends and speed/tempo sessions midweek.
I have recently been persuaded to start running again and managed a PB in the recent Two Castles 10k race so all that walking must be having some benefit. Where the training plan calls for aerobic exercise, I can run and better still these usually fall on a Tuesday and Thursday (club nights).
As well as the walking (and running) I have the fundraising to do. I have accommodation to sort out (having to find somewhere that will let me roll in in the wee hours of Sunday morning). I want to provide live updates / log / tweet my progress, so need to sort out batteries for the phone and loads of other bits and pieces. The walk could be the easy part !
Please check the blog to see how I’m getting on and if anyone fancies joining me on a training walk (I can do all speeds) just let me know.
Kev Baldry
kev@byke5.co.uk