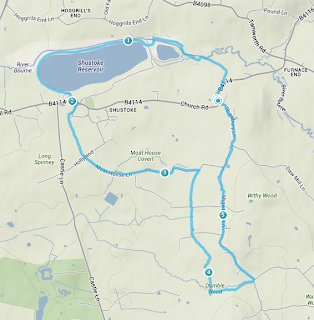 What a glorious evening for a walk.

After walking to work ( 4.5 miles ) and back ( 7 miles ) I drove to The Griffin, arriving at 6:45 for a 7 o’clock start. All in all, there were twelve of us as we left the car park and started a two hour ramble around the parish of Shustoke in the sunshine.

Most of the other walkers were from Shustoke and I picked up a bit of local history on the way. Also a far amount of wildlife was spotted including deer tracks in more than one place.

Apparently, some of the crops, especially the potatoes had shot up in the last few weeks but others, like corn-on-the cob, were rather late. The pungent aroma of wild garlic was still detected when we were alongside any waterways.

We arrived back at The Griffin just before 9, having covered nearly six miles in a little under two hours. A pint of Otter Head cleared the dust from the throat before the drive home.

Many thanks to Keith for leading the walk and all the others for being such good company. I’ll have to keep an eye open for any future events of this kind.