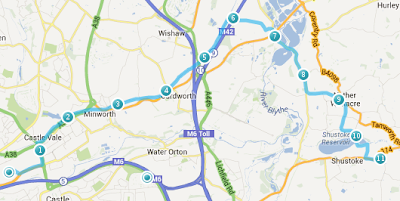 Tonight’s training walk consisted of some 11 miles from work to my favourite watering-hole, The Griffin near Shustoke.
After the first mile, the next five were along the Birmingham & Fazeley canal before turning off to Bodymoor Heath and then to Whitacre Heath before passing Shustoke reservoir and on to The Griffin.
Mostly wet from the rain and later from the undergrowth.
I arrived at The Griffin 2 hours and 31 minutes after leaving work at an average speed of 4.4 mph.
I walked with my Berghaus rucksack which I discovered has a squeak and chaffed quite a bit in the pits area. A new rucksack is now on the shopping list.
Once at the pub, I spoke to the landlord who okayed my pinning one of my posters over the fireplace which was soon rewarded with a stranger thrusting a five pound note into my hand for Macmillans.